The Light of Other Days

In The Light of Other Days, a solo exhibition at the Loomis Gallery at Mansfield University, I draw my primary inspiration from the poem Oft, In the Stilly Night by Irish poet Thomas Moore:

From soaring clouds stretching out from an unseen singularity to the salt marsh fed waters of Chris’s Low Country birth to the lovers standing before glacial fed waterfalls to the echoes of an airplane fading through the sky, the black and white photographs presented here are quite literally, the light of other days, the manifestation of the past as present.

Sometimes stretched across a period of time through long exposure methods or sometimes a specific moment, these photographs actualize the past and allow us to reflect upon the poem’s elegiac words.

Like a surrogate memoir, this exhibition seeks to evoke memories, places, and times that are no more. And as we think upon this past, we are confronted by all that comes with it – the radiance, the darkness, the joy, the sorrow, that which we still embrace, that which we cannot let go of.

And more often than not, as is the case upon the narrator’s death bed, we become consumed by the past. It bullies us down a crumbling path of misdirected nostalgia and we become forever displaced in a labyrinth of an unattainable ideal.

But perhaps we decide to heed the poem as a cautionary tale and rather than engage in a fruitless exercise in longing, we embrace the light and let it shine upon us. In doing so, Oft, In the Stilly Night is no longer an elegy, but a devotional to embrace all that is around us so that the beauty and the sanctity of the present moment washes over us. And when this occurs, we find equal fulfillment in both the photograph itself and the act of viewing it, and we learn to more fully live in the illumination of the present.

Processed from digital files, these photographs are printed using a silver-based emulsion process on Ilford Black & White panchromatic, resin-coated paper with a hundred year archival rating. With a time out of time quality and an ability to reveal details and elements often hidden in color photography, black & white proves ideally suited for bringing the past forward into startling clarity. 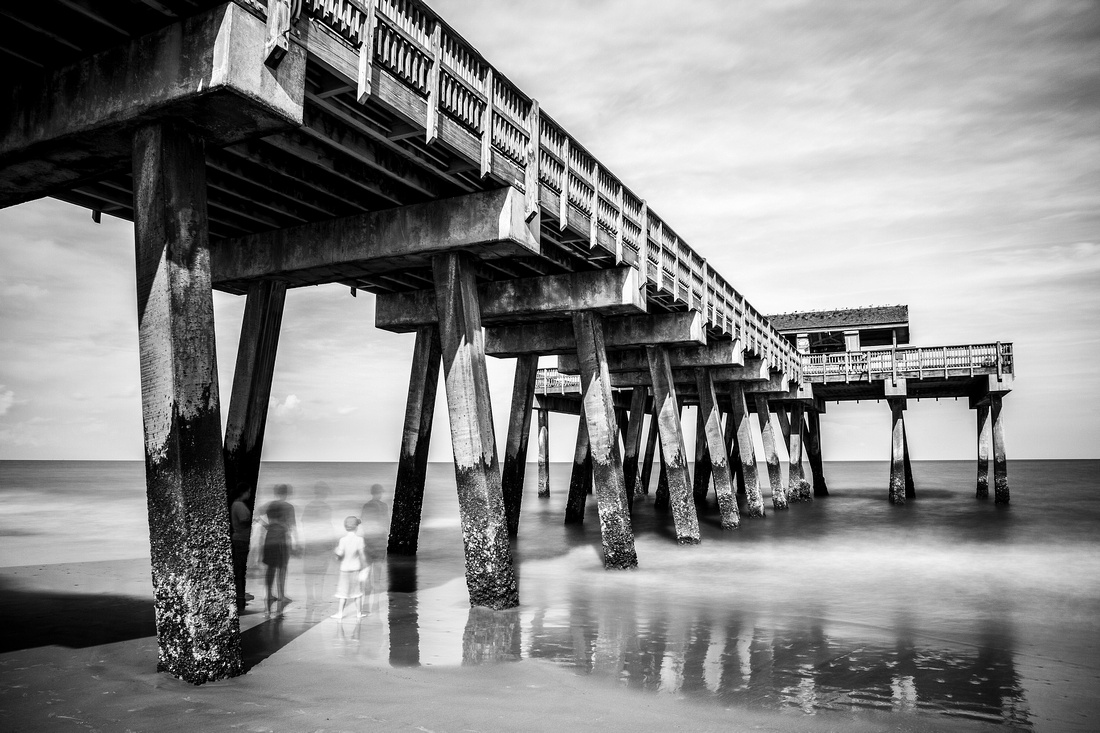 Low TideA slight film of water covers the hardened packed sand of Tybee Island. Come high tide most all the beach will submerge beneath the Atlantic’s murky depths. A family meanders amongst the exposed, barnacle covered pylons. Like the tides themselves, they are glimpses of visitors once were and will soon be again. The echoes of the past manifest as present and wait to be replenished again along this coastal sea island of the Georgia Low Country. 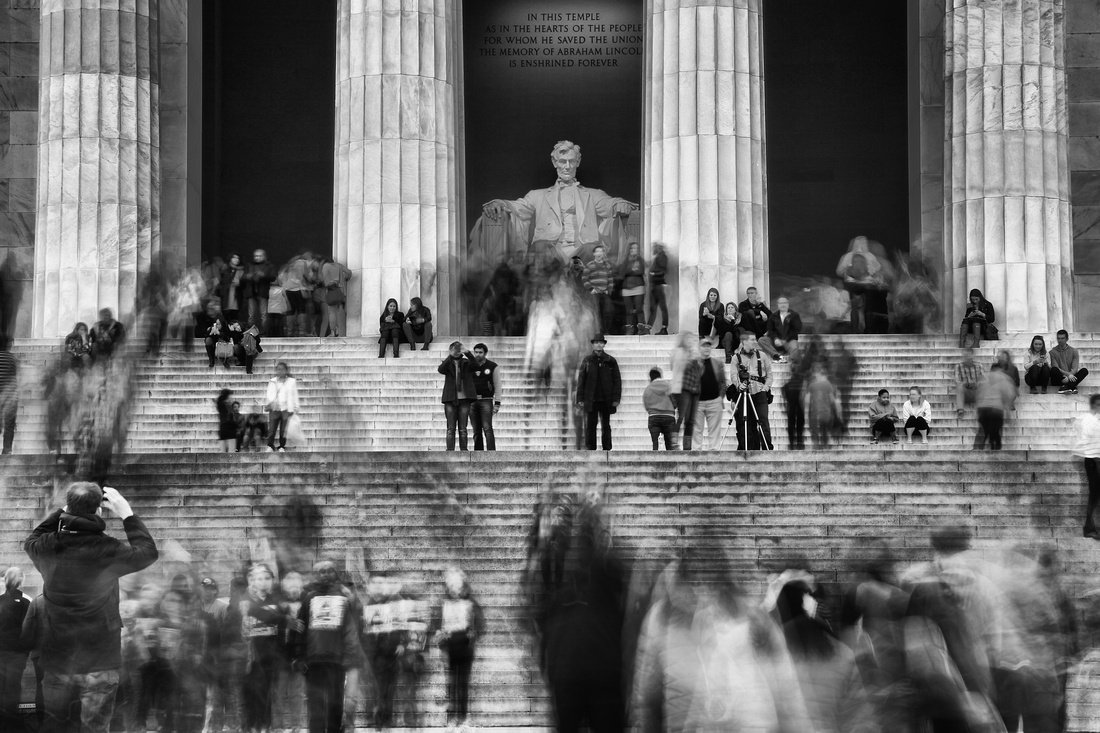 LincolnAfter a long day of sightseeing we head towards the Lincoln Memorial to catch the sun's last light before it dips below the hills that rise gently above the Potomac River. As the memorial becomes illuminated I focus on the stoic Lincoln sitting in his chair. The people both stand and move in a quiet reflection that befits the monument to our greatest president. And all the while, he watches over us all with his customary magnanimous grace. 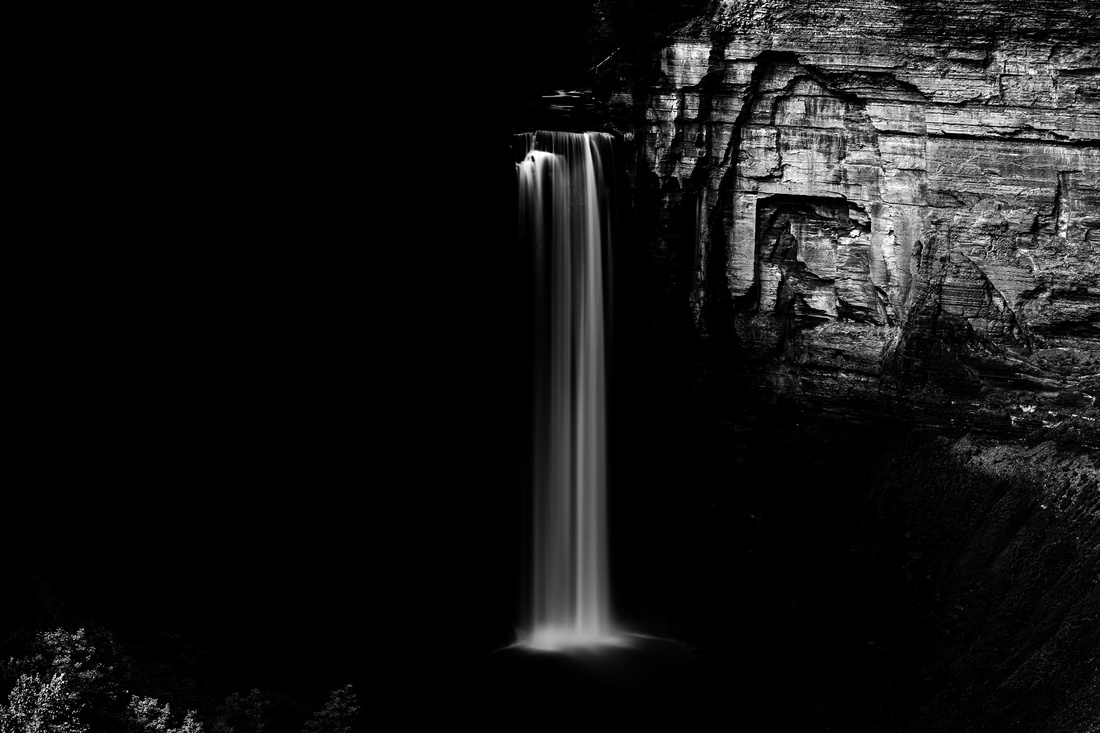 In Darkness and in LightIntense summer light angles down upon the canyon walls of Taughannock Falls. Once extending to the shores of Cayuga Lake, the canyon continues to recede against the waters falling endlessly into the gorge below. The final snows of winter have long since melted away and the raging waters of spring have slowed to a leisurely crawl. With half the canyon wall in underexposed, shadowed darkness, the remainder of the walls and water shine in brilliant illumination. 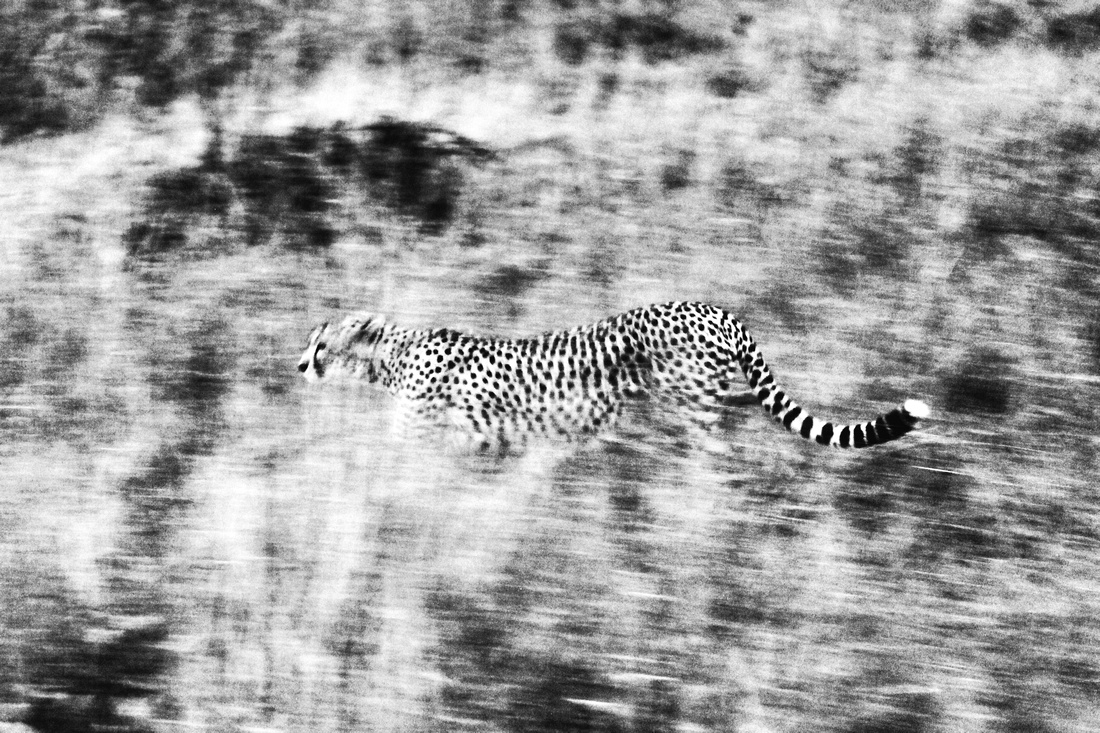 CheetahAs night envelopes the Tanzanian dusk, a cheetah stalks its prey across the plains of the northern Serengeti. Out of the scene, a family of warthogs huddles into sleeping holes found in the rain softened earth. The measured guidance and narration of our guide Fulgence details the scene as it unfolds. Despite our pleas and encouragement, the cheetah comes up empty and the warthogs live to drift into the savannah night. We ride in a relieved disappoinment back to camp. 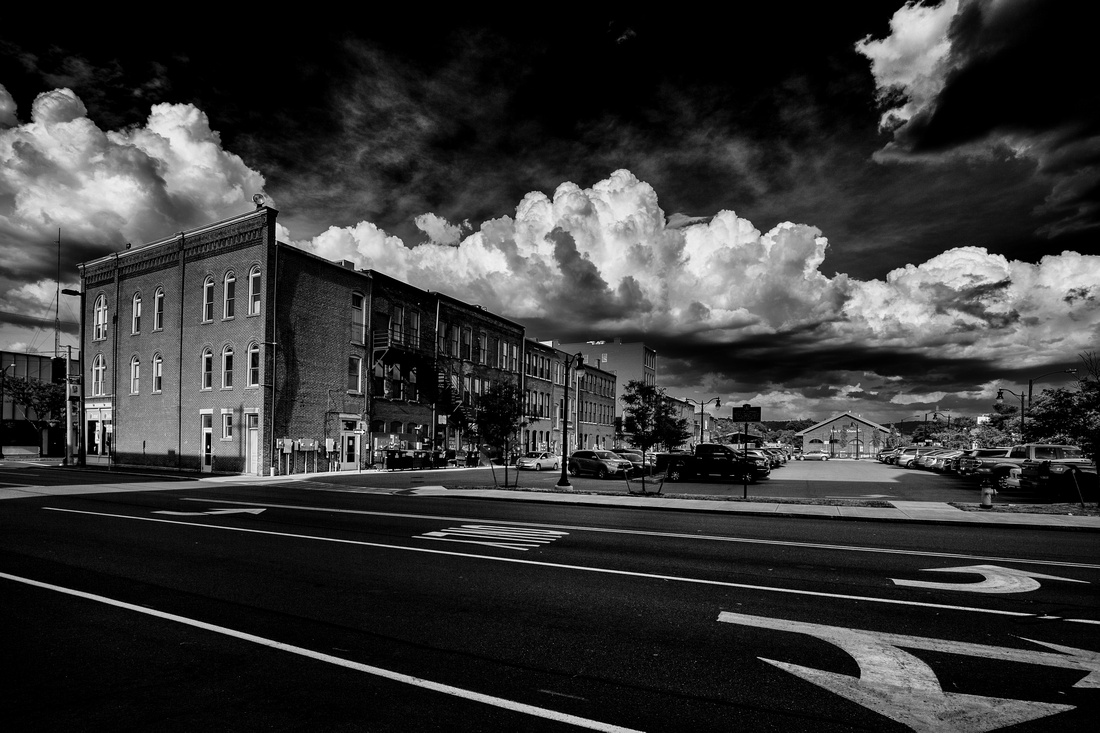 On Market StreetRestored buildings along Market Street in downtown Corning, NY stand sentinel to a fast approaching summer storm. Higher and higher the clouds rise along the horizon line, consuming the open air like a sponge absorbing water. Soon it will soak in the entire sky until it can take in no more and it will unleash a torrent of rain upon the earth. As it does so the waters of the river beyond the buildings will surge and flush downstream, fulfilling their role in the cycle started high above. 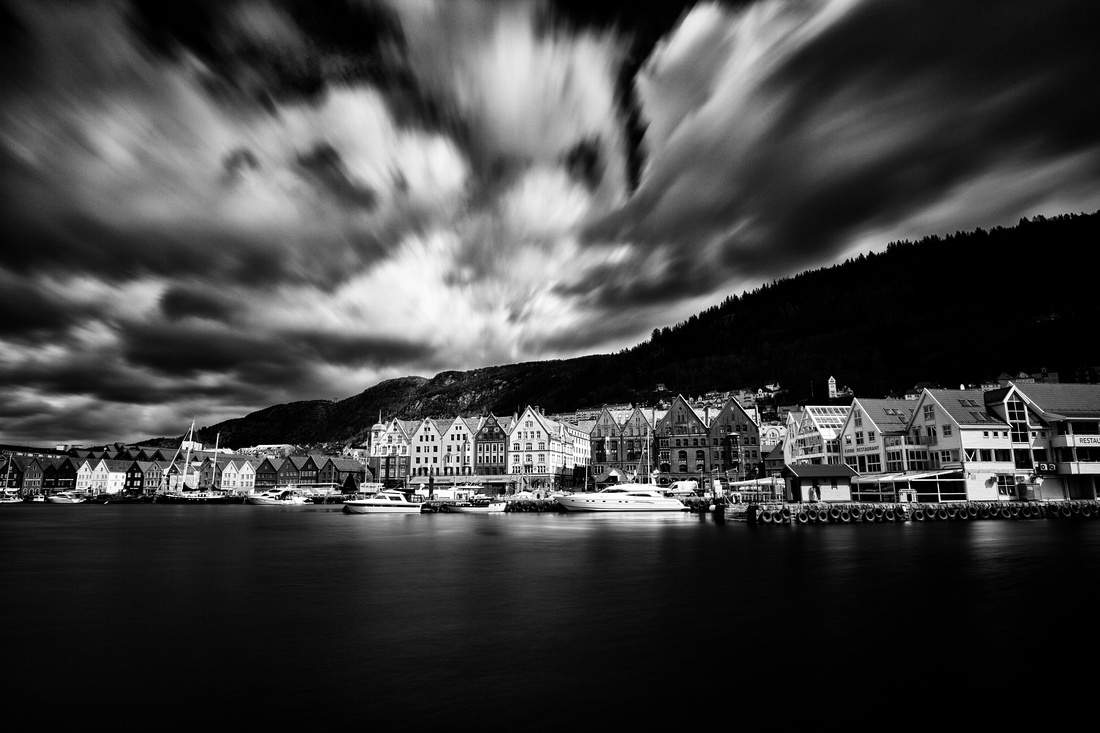 BergenOur last day in Bergen. The effects of a recently passed April snow storm fill the Norwegian air. From over the surrounding hillside, Nordic winds flush lingering clouds through the high latitudes as the sun's rays burst through a cloud break to shine down upon the famed architecture and row houses of Norway's most iconic waterfront. Lined up at perfect attention, the scene eagerly awaits our aesthetic inspection before we depart for home the next morning. 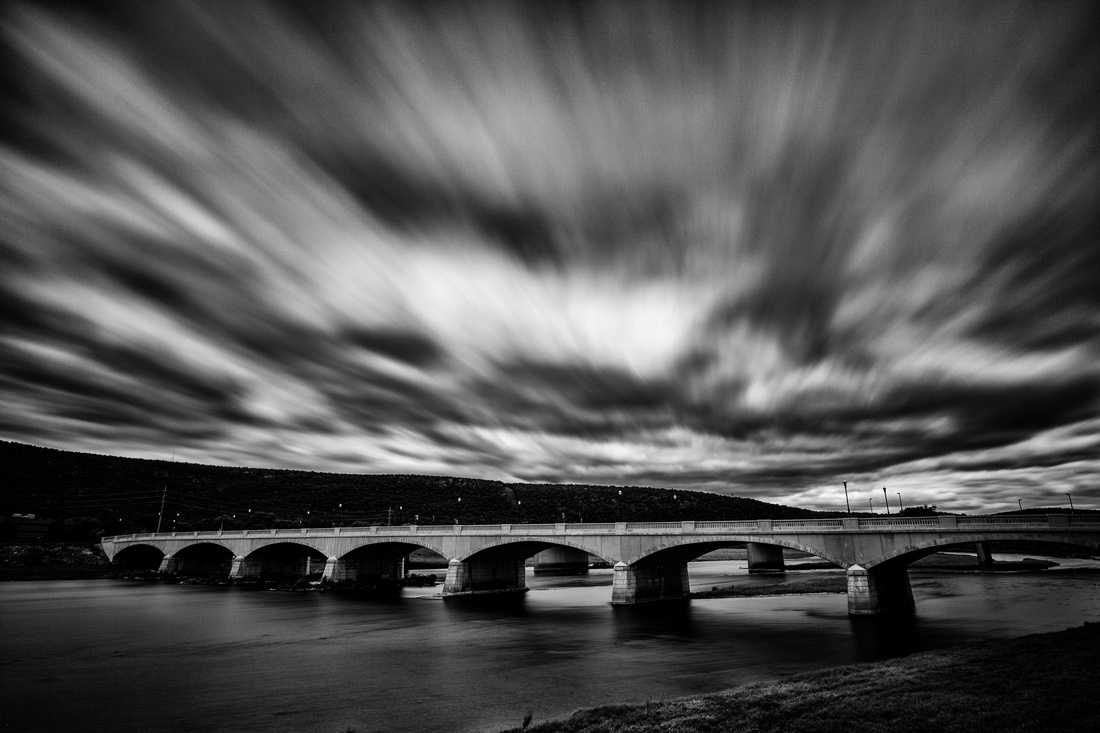 CenterwayThe reconstructed and resurrected Centerway Bridge, it traverses the Chemung River connecting the north and south sides of Corning, NY. On this early Fall day, threatening gray clouds consume the sky. They funnel along the river valley and race over the bridge, seemingly stretching out from a singularity beyond the northern hillside. Winter is approaching, and with it, the gray and omnipresent clouds that will serenade us throughout the coming months. 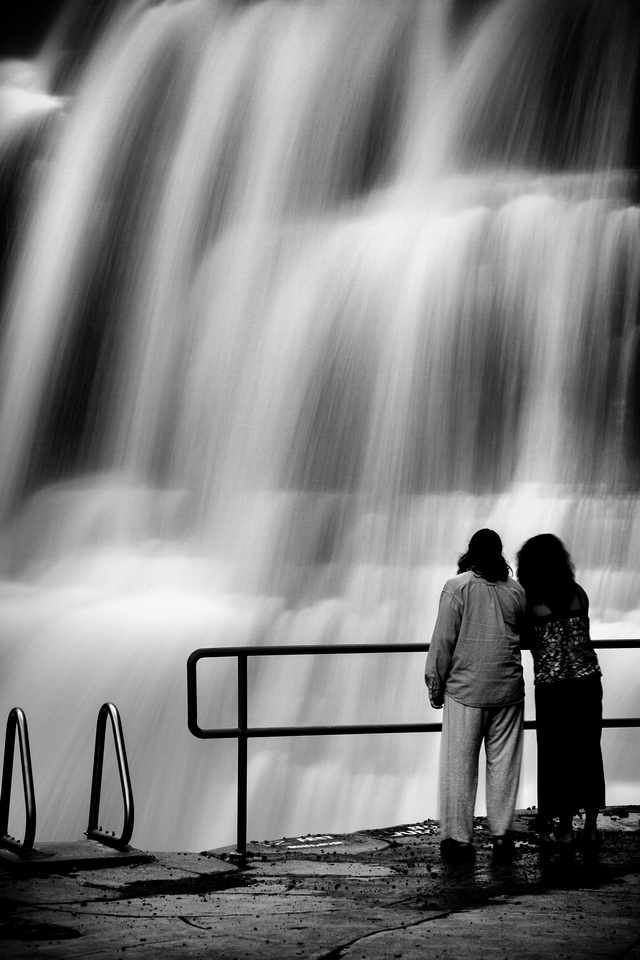 Mystery FallsAmidst the waters of Treman State Park, a pair of women hold one another in an intimate embrace. They stand still just long enough to become a part of the long exposure that extends the water’s flow into perpetuity. Perhaps they are lovers celebrating an anniversary or simply old friends enjoying a memory of days passed by. What lurks before the metal beams and water's edge is surrounded in a spray of awe and mystery, protected by the words flowing upon the waters. 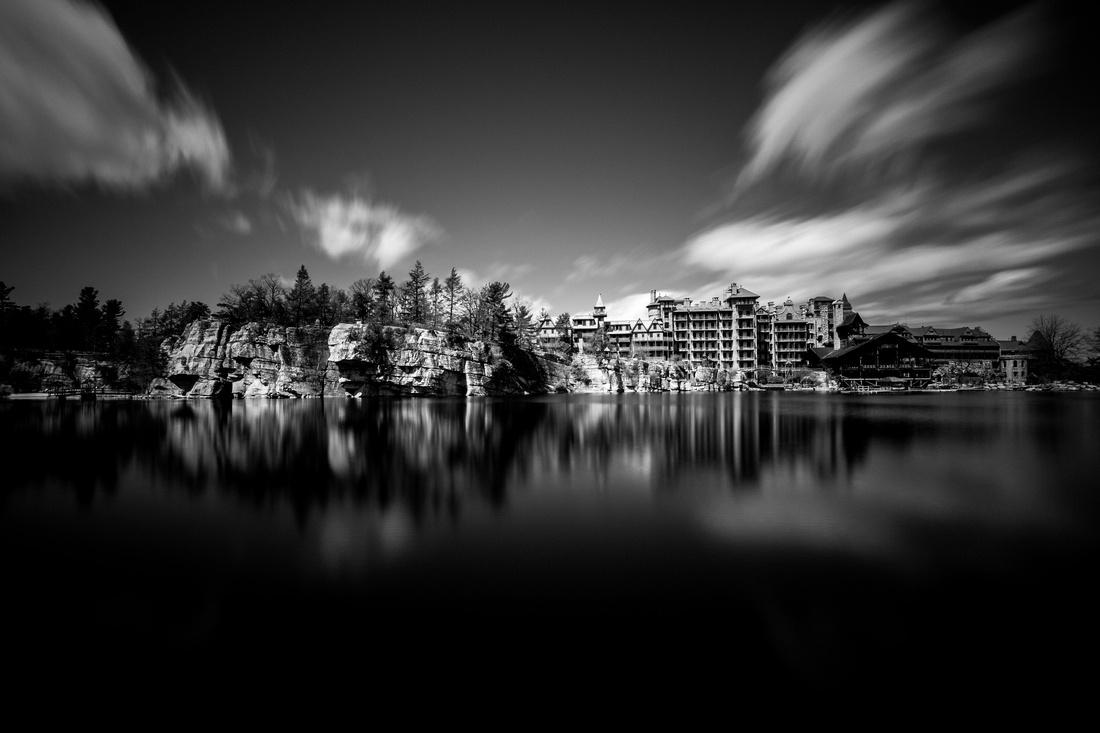 MohonkHigh upon the Shawangunk Ridge, the cliffs and walls of Mohonk Mountain House, and the soaring clouds above it, reflect back upon the calm waters of Mohonk Lake. The sky and waters together again, the carved rock above back again with the submerged rock from which it came, and the trees once more connected with their ancient roots. The mirrored scene brings together the past and present as they merge into one being. 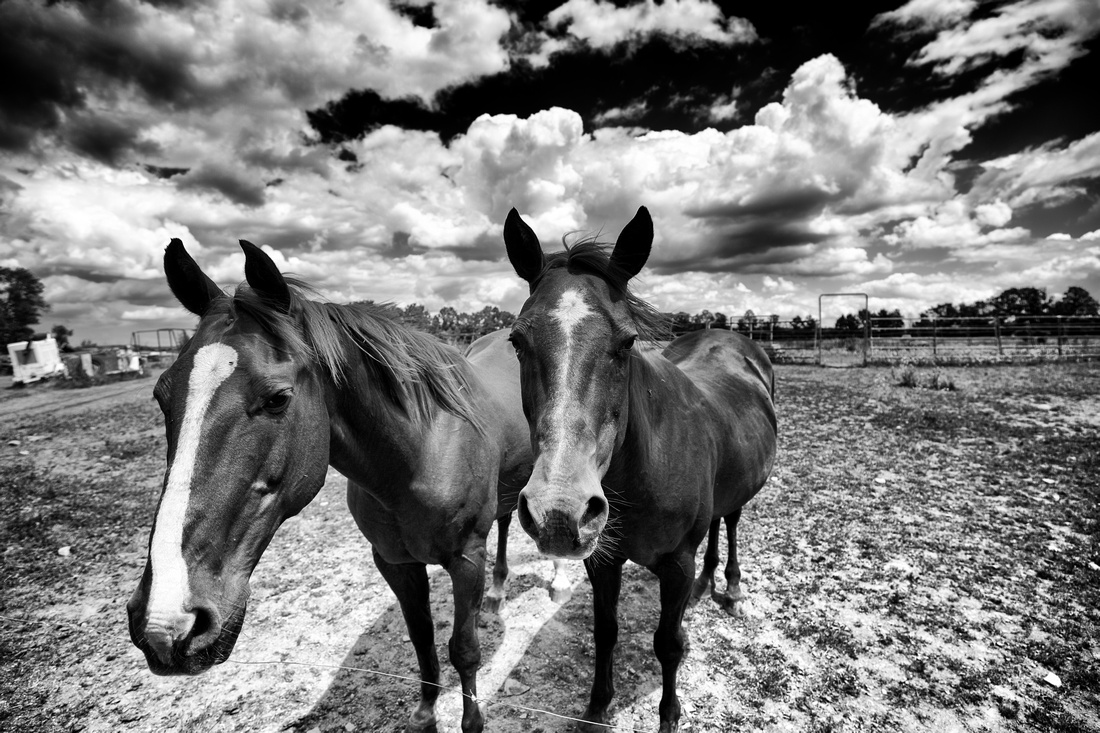 Penny HorseTwo horses sway over a fence above the hills of Caton, NY. As high winds whip their manes into a frenzy, a third horse, Penny Horse, wanders off in the distance. She is the first horse my daughter rides. She is now my daughter’s horse. Or so she will tell you. Every horse is Penny horse. Even the missing ones, those that can never be again. My daughter is living devotion to the past become present and the power of embracing the beauty and hopefulness of this mergence. 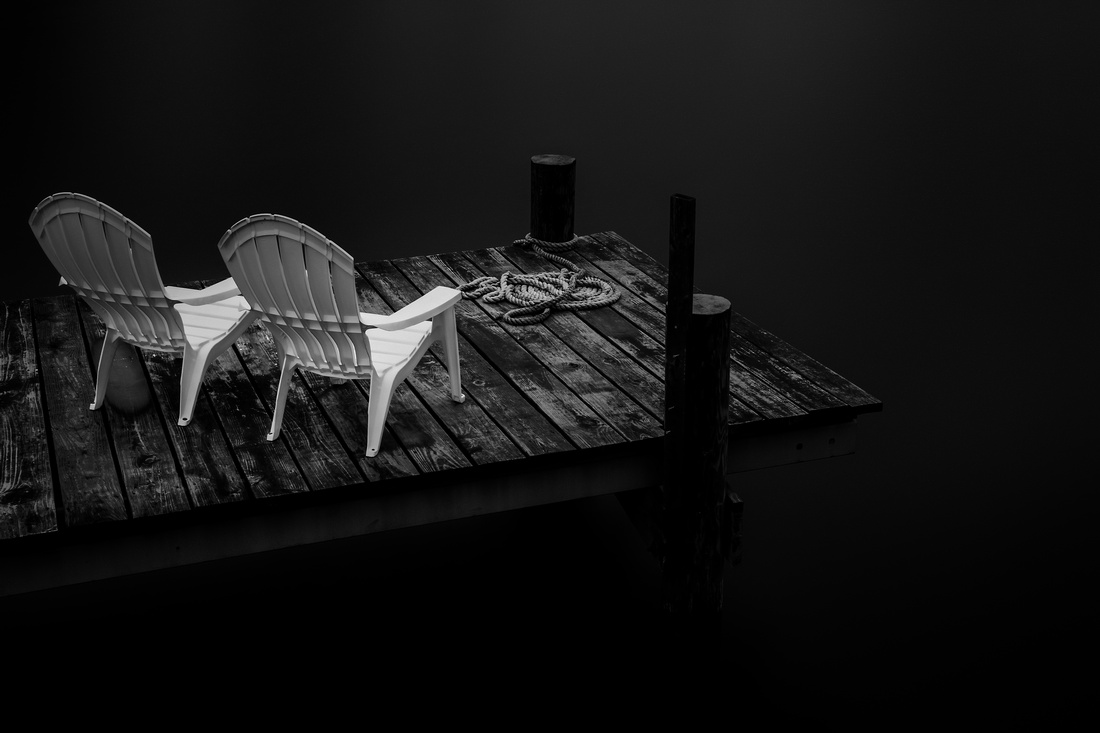 On the LakeThe entryway into glacial echoes of an age since passed, the waters of Seneca Harbor have emerged from their long, winter hibernation. Existing in both stasis and movement, the Adirondack chairs are caught in that strange land between the changing seasons. They eagerly await the warmth of the new season and for visitors to give them purpose again, to welcomes us in, and to remind us that they we too must awaken from our hibernation to share in their wonders. 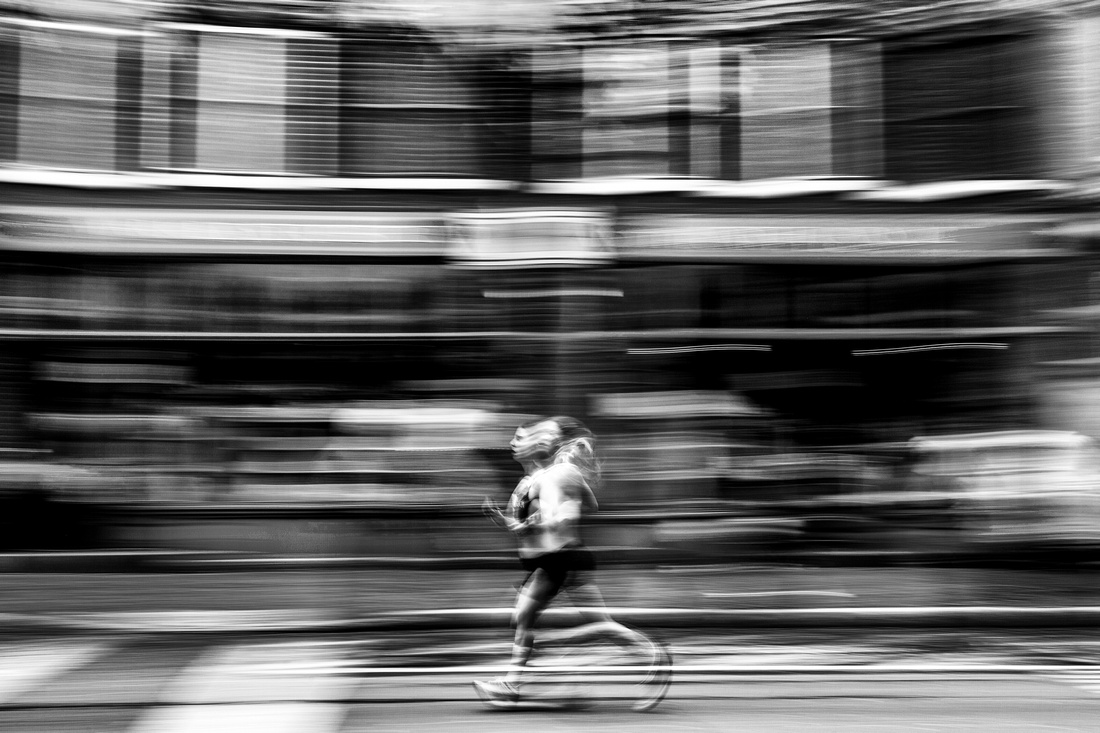 RunnerShe races towards the finish line of the Wineglass Marathon. A cloud break finally emerges and the sun casts down upon the buildings of Market Street as she soars past them. As I pan my camera with a long exposure shot, the world disappears into streaks of brilliant light. Like skimming across the event horizon of a black hole, past, present, and future fight for her soul as the contradiction of sustained movement frozen in time is brought forth. 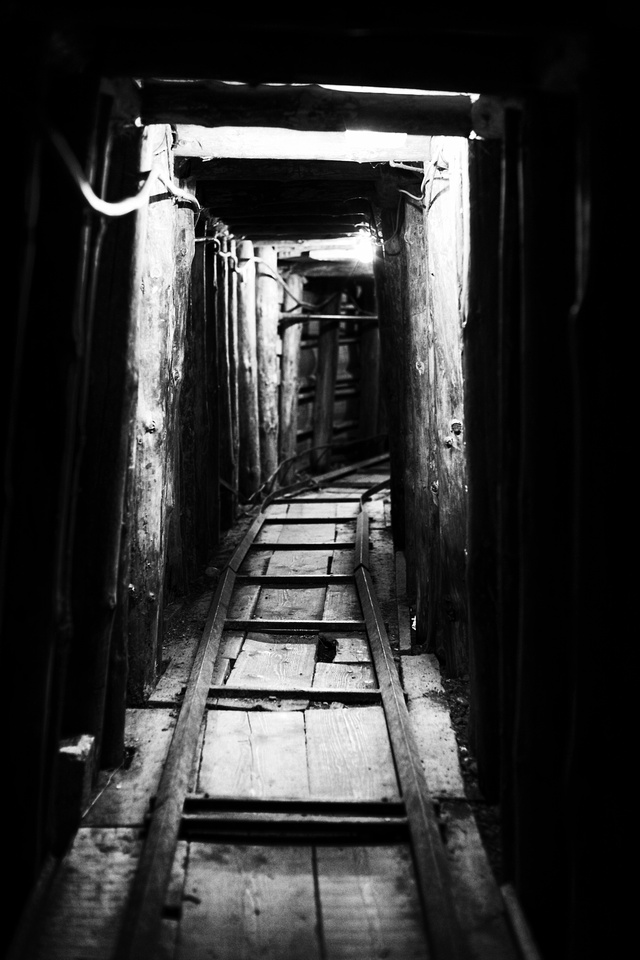 SarajevoWe move in hushed tones upon the railroad tracks that run underneath the Sarajevo airport. No longer in use, this underground tunnel is a reminder of and remembrance to a time when the ground above was pockmarked daily by bombs raining down from above and the ground below was the only artery of food and supplies for a city under relentless siege. Never discovered or impeded, it stands testament to all who lived and died on this Balkan land. 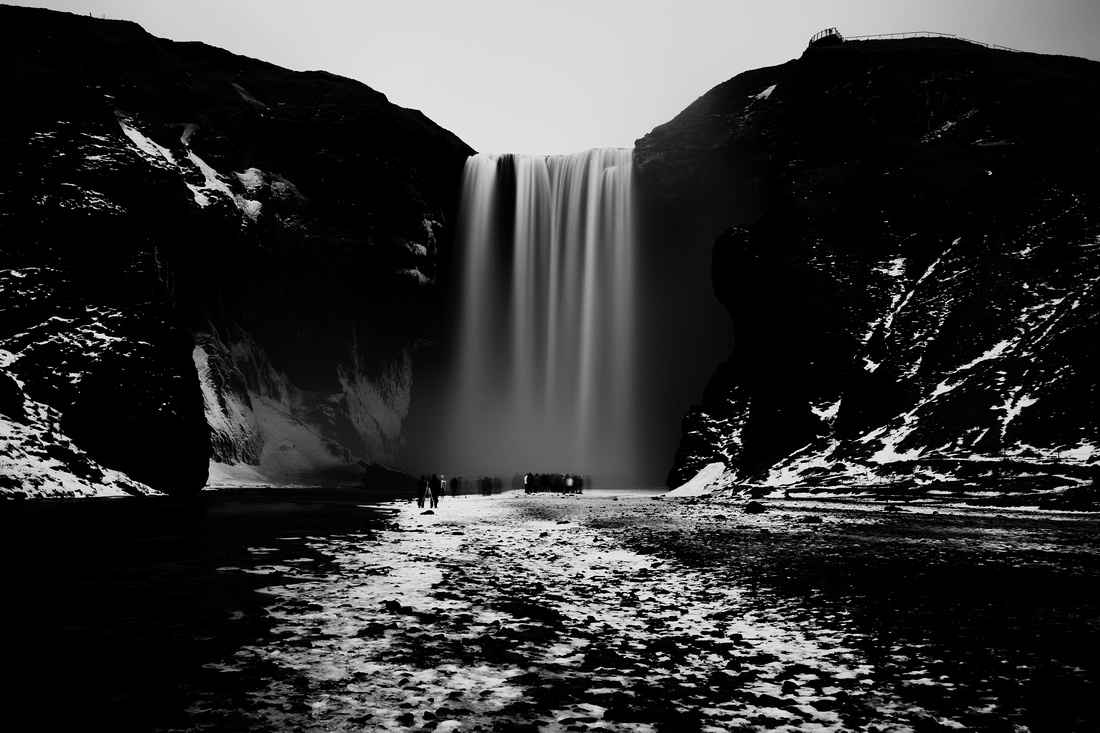 SkógafossWaterfalls are everywhere along the southern coast of Iceland and none are more inviting than the towering waters of Skógafoss. Thundering nearly two hundred feet downward into a black stone creek bed below, visitors huddle amidst a landscape shrouded in cloud cover. With a neutral density filter, and the long exposure that accompanies it, the waters exist as they have for millennia, flowing eternally yet always in the present to the viewer at hand. 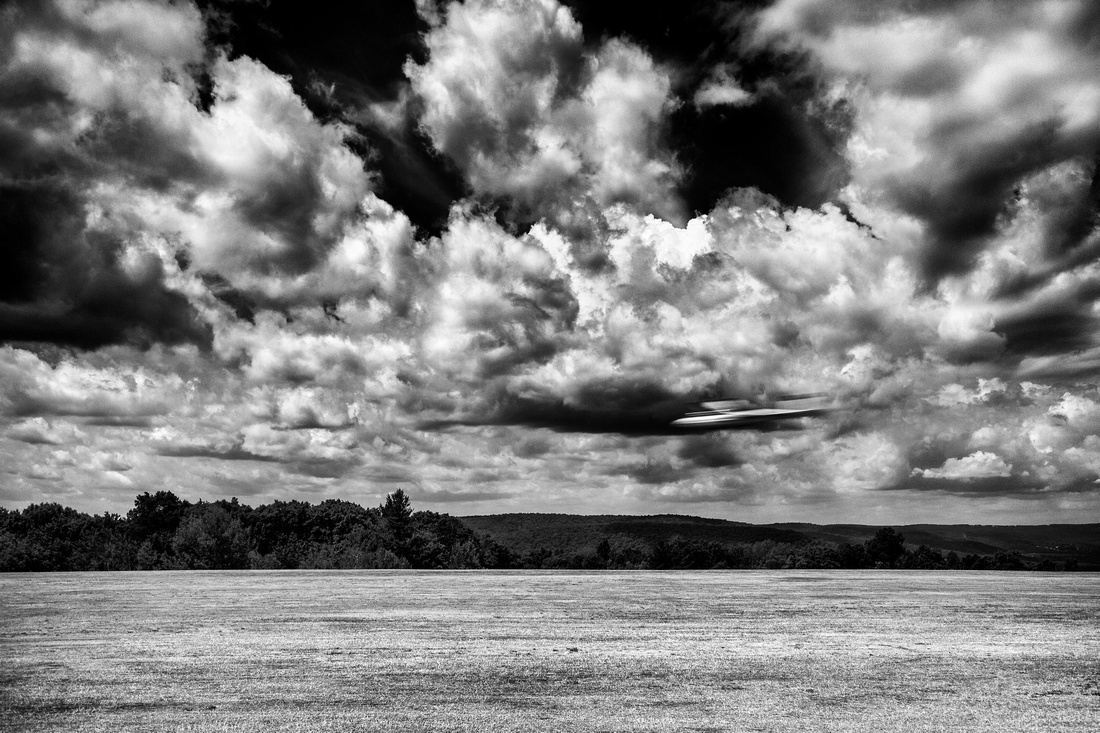 SoaringHigh atop Harris Hill, the soaring capital of America, a glider has completed its descending loops and is on its final approach. The same thermals that propel the clouds slowly building in the distance are the same ones that will give the glider just enough lift to gracefully touch down. The moment stretches out as a series of single instances. Like a stone cast upon waters, the glider ripples through the air leaving behind a wake of memories cemented in time. 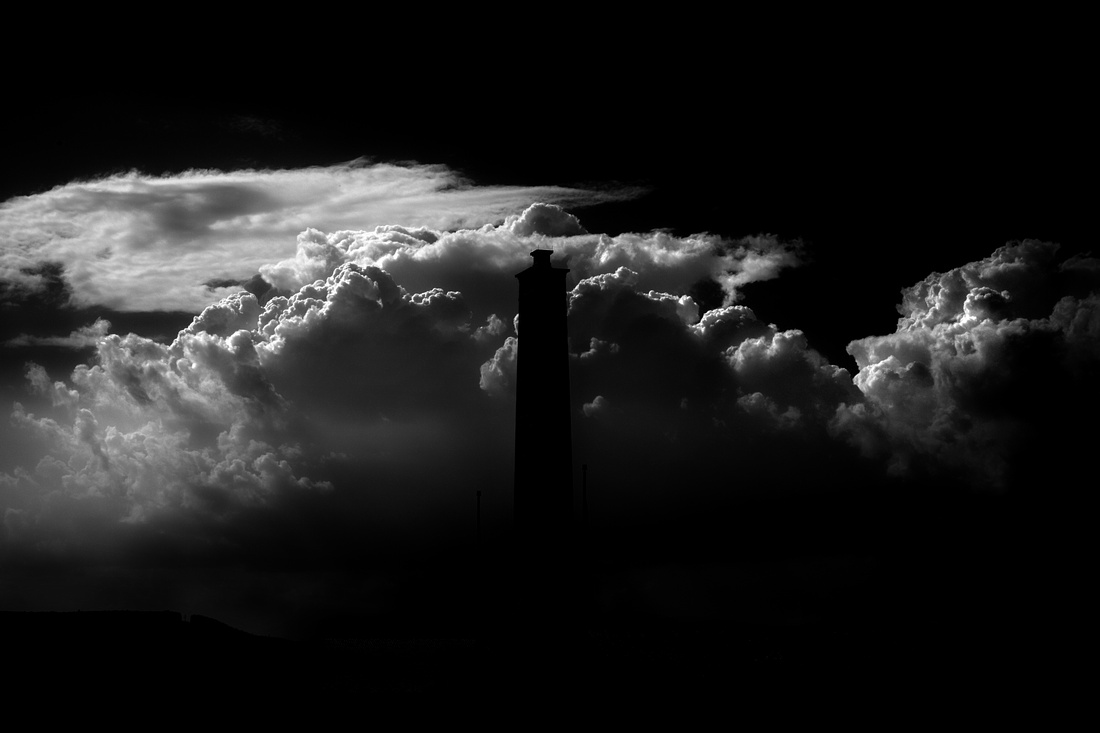 The ValleyDeep in the Chemung River Valley and high above the river that flows through it, the most glorious of cloud formations rises up behind Little Joe Tower. My preferred vantage from atop the parking garage in downtown Corning offers a perfect platform to watch the distant thunderstorm boil in the air. The clouds swarm the vista and soon will engulf the fading evening light. The tower too will be swallowed by the encroaching storm and the world will soon enter into darkness. 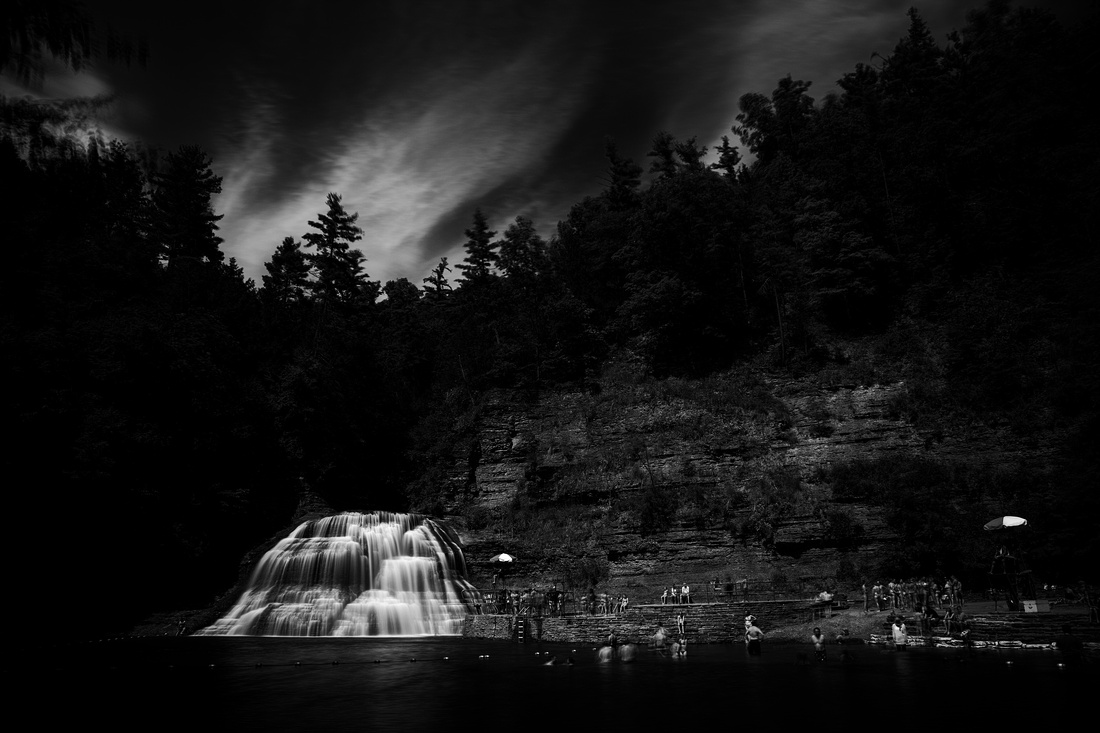 Summer's EndThe late afternoon light shines down upon the waters of Treman State Park. As summer gives way to Fall, a final remnant of visitors takes in the splendor before the waterfall. Soon the swimming hole will be closed and another season in the books. Fall will bring in the rains and then winter will casts its frozen net upon the land. But, even then, this intersection of nature and humans will endure as the waters will find a way to flow against the hand carved space. 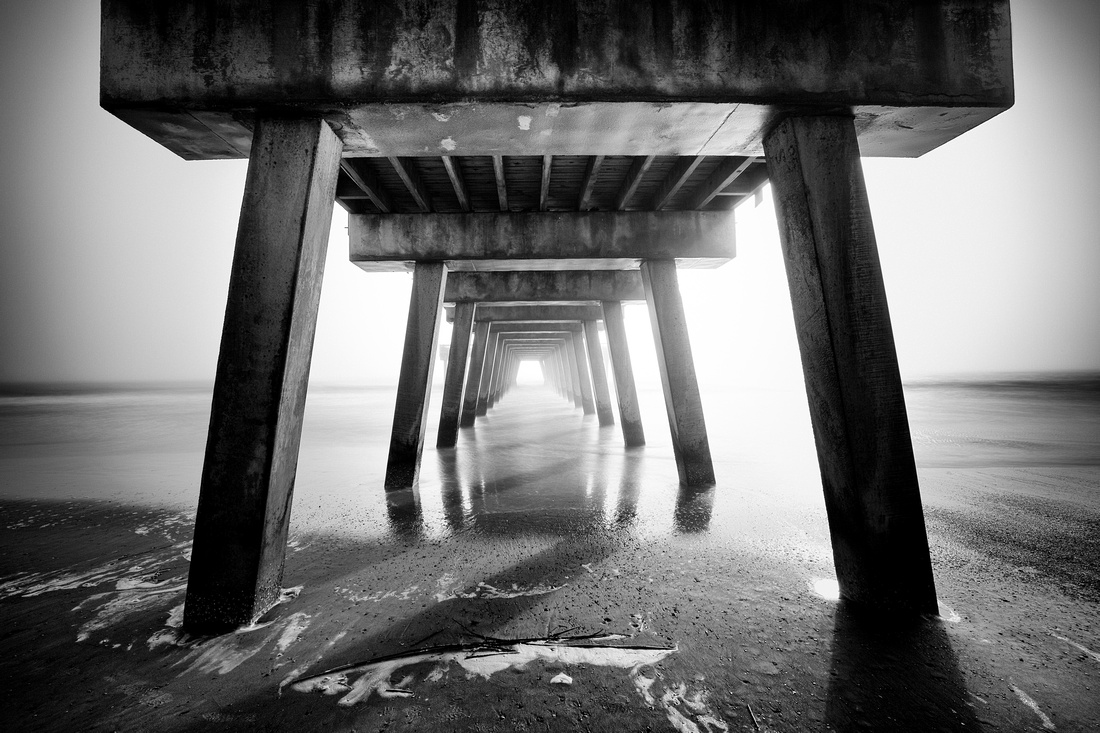 The Light of Other DaysA heavy fog extends across the southern Atlantic sea board, blanketing the horizon in an abyss of white light. It slowly begins to dissipate into the salty air, burned away by the rising sun. As it does so, the waters too begin their return from which they came, back to cover up the exposed sand and lingering tidal pools. And as the early morning sun breaks through the fog, its light sweeps through the Tybee Island pier to illuminate the darkness underneath. 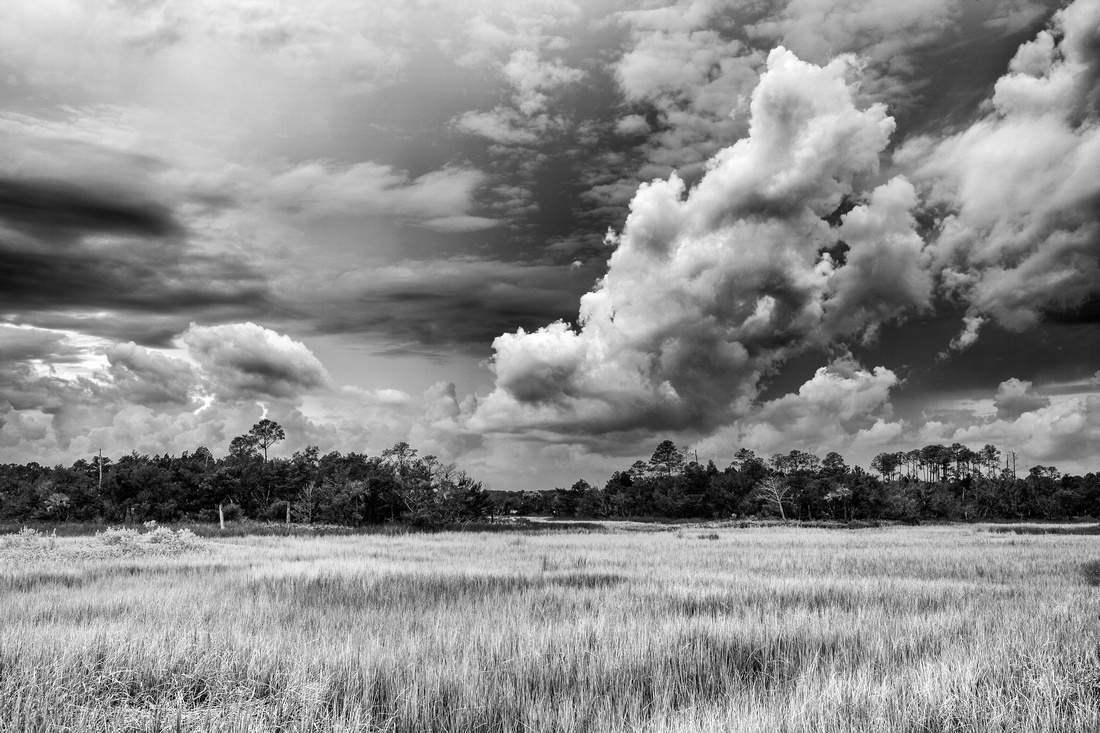 The Low CountryOn the borderlands of Wilmington Island, billowing storm clouds rise above the endless salt marshes that separate the tributaries that form the Low Country. Just as the tides ebb and flow, and the waters return to the sea from which they come, so too do I return back to the Low County, back to my birthplace where Turner Creek runs towards the Bull River and into Wassaw Sound, and beyond that, back to the salted heart of the Atlantic Ocean that pumps life into this land. 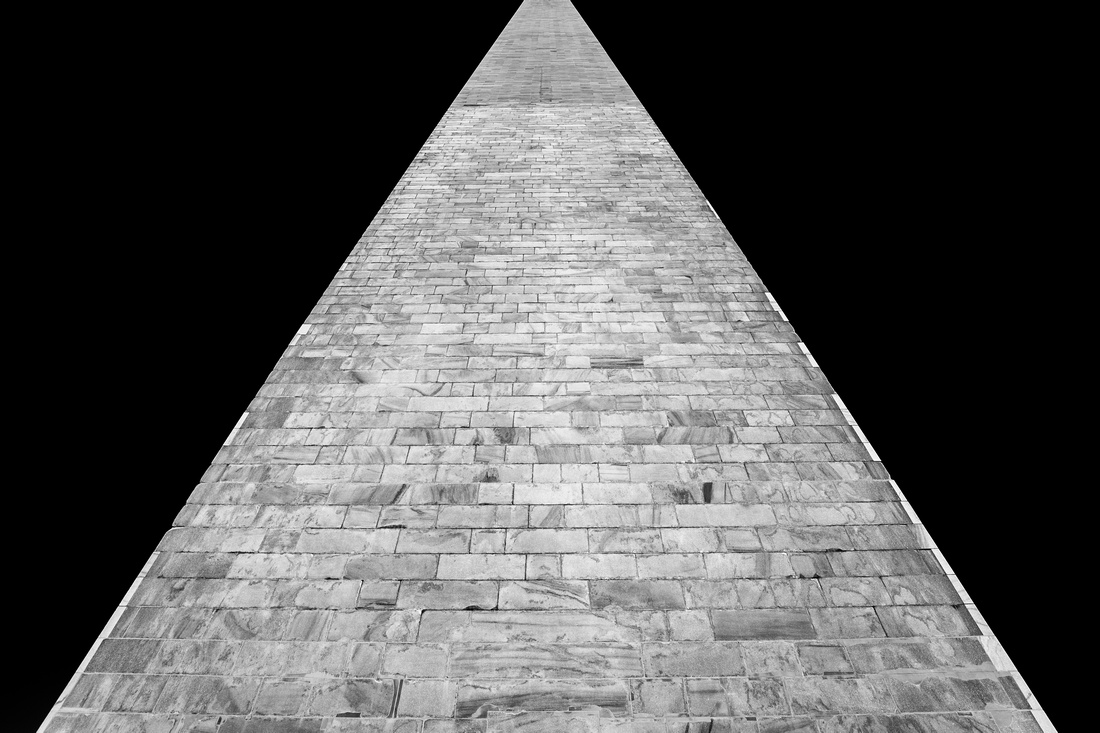 To the InfinateA stone walkway extends into the infinite expanse of a seemingly eternal black void. Somewhere beyond lies a singularity pulling and compressing this monolithic bridge from a forest of stones into an infinitesimally smaller and smaller point. And there, just of sight and atop the world's tallest obelisk, the promise and clarifying purpose of an aluminum apex reflects back the sun's radiance and shines forth across the land.